Creative Design Versus a Neighbour’s Right to their View

In a recent New Zealand case study, a Court decided that a four-metre high fence that blocked an elderly couple’s panoramic views of Wellington harbour would need to be removed or drastically lowered, despite the fence apparently having been designed and built as a “children’s fort” and otherwise being compliant with planning controls.

Upholding the rights to views and privacy of the adjoining owners (Peter and Sylvia Aitchison), the Environment Court held that the design of the four-metre fence to double as a children’s play fort was merely a “contrivance” to allow the landowner (David Walmsley) to circumvent the rules that prevented the building of a fence to that height.

The lesson for architects involved in such creative design may be that, despite the design and build otherwise being compliant with planning controls and regulations, an aggrieved neighbour can still possibly maintain an argument that they have property rights to a view. 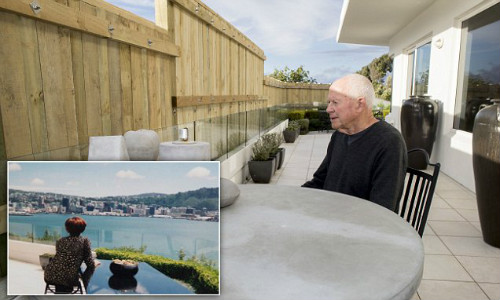 As with most neighbourly disputes, there are usually two sides to every argument, and so it proved with this case. In regard to the Aitchisons’ claims of loss of view toward the harbour and the city, Walmsley simply stated that the fence/fort was allowable under the rules (namely the District Plan) and that he was not obliged to consider the drastic effect on the neighbours’ views.

There was also an argument that a fence had been in place at this location previously and the developers of the Aitchison property had removed that fence without authority, promised to replace it later on and had not done so. The property had been in the Walmsley family for generations.

Furthermore, Walmsley argued that he was in fact putting up the new structure to protect his family’s privacy, and to avoid the Aitchisons carrying out landscaping/excavation into his property as they had allegedly done in the past.

In regard to the walkway on the fence/fort leading to a loss of privacy for the Aitchisons (as they claimed), he said his neighbours could simply put up curtains. This argument was derided as “facetious” by Peter Aitchison, who said that every time people stood on the walkway and looked over the fence, he and his wife would need to draw curtains.

The ensuing debate led not to a view to a kill, but a view to a date with the Environment Court. This was because an objection to the Council initially proved fruitless, with the Council advising they were powerless to act if the structure was permitted under the District Plan.

Once at Court, the Judge was critical of the developer and opined that Walmsley was incorrect in assuming that just because planning controls allowed him to build the structure, that he could simply ignore any potential loss of amenity to his neighbours.

While the Council had previously said the four-metre fence was allowed under the District Plan, it later adopted a safer course and by the time of the Court hearing was supporting the Aitchisons’ bid to have the fence removed or lowered.

Meanwhile, the Aitchisons produced the following evidence at the hearing:

The presiding members at the Environment Court were Judge Brian Dwyer and also Environmental Commissioner Ian Buchanan. As part of the ruling, the Dwyer said he agreed with the town planner’s evidence that the fence structure was highly offensive when viewed from the neighbours’ side, and was a clear attempt by the designer to avoid the rules relating to height of boundary fences.

Buchanan, for his part, found that the fence was “dominant and overbearing” and that the walkway atop it would affect the Aitchisons’ privacy. In regard to the main objection about loss of view, he said a key component of the residential amenity for the land was the view of the harbour. As a consequence of the construction, the neighbours had suffered virtually a total loss of their primary view.

Given that the Court had the power to order that the structure could either be removed or lowered, it found in the Aitchisons’ favour. They were given one month to file an enforcement order requiring Walmsley to remove the fence/fort from his property.

Designers may well argue, and this has been upheld in planning disputes previously, that enjoyment of a view should be seen as a temporal and fortuitous benefit that is not a property right enjoyed in perpetuity.

When one considers the draconian loss of view caused by the structure, and the bare wall that the adjoining owners had to endure, it calls into question any interpretation that just because a structure on a property may otherwise be legal and compliant, that the neighbours must endure adverse impacts.

For thirty years, Lovegrove & Cotton have represented builders, building surveyors and building practitioners in Melbourne, Canberra, Sydney and Queensland. Doyles Guide ranks Kim Lovegrove as one of the leading construction lawyers in Australia. Justin Cotton, likewise, is a leading Australian construction lawyer and widely respected in the building fraternity as evidenced by his recent elevation to Chairperson of the HIA Industrial Relations and Legal Services Committee, and member of the Regional Executive Committee, for HIA Victorian Chapter. Lovegrove & Cotton can help practitioners resolve any type of building dispute and are preeminent in the area of building practitioner advocacy. If you wish to engage the firm, feel free to contact us via our website or by emailing enquiries@lclawyers.com.au.